(continued from the HOME page)

The prosperity of the Mississippi Valley always has depended upon location and transportation. From the First Americans who established a great city at Cahokia in the year 600 to the Europeans who founded St. Louis in 1764 until today, much of the travel and shipping has been carried by the region's great rivers.
The first motorized vehicle to reach these parts puffed and chugged up the Mississippi River nearly 200 years ago

That steamboat averaged about three miles per hour upstream -- less than the pace of man walking along the river bank -- and sometimes the crew assisted its low-pressure boiler by poling the hull against the current.

The St. Louis Globe-Democrat explained in a special edition that celebrated the city's 1964 bicentennial:
It panted into sight with its single stack belching smoke, and then with much coughing and wheezing it eased into shore at the foot of Market Street and tied up.
It was the Zebulon M. Pike. The clumsy craft had left Louisville six weeks before and was the first steamboat to navigate the Mississippi north of the mouth of Ohio. A crowd gathered to look at this new contraption that could travel over water without being pulled or poled or rowed or sailed. Some Indians in the crowd took to their heels at the smoke and noise.
Captain Jacob Reed, who could feel the eager curiosity of pushing spectators, saw a chance to make a quick profit. For the outrageous price of a dollar apiece he would let the folks come aboard and look around. In a few minutes he had a pocketful of dollars and danger of the crowd swamping the boat.
The Zebulon M. Pike stayed around a few days while gathering a cargo, then left. Thereafter, it made regular four-week trips between Louisville and St. Louis.

The Pike was simply a barge fitted with a steam engine and side wheels.
There really wasn't much to see. The wheels had no wheelhouses. But it was the future. And there were those on the St. Louis riverbank who may have sensed it that day.
By 1834, some 230 steamboats were making a half-dozen trips a year between St. Louis and New Orleans. Within 10 years the number had increased to 686, with a tonnage of 144,000. Thriving on its river trade, the city had grown to a population of more than 30,000.

For St. Louis, the golden age of steamboating was enjoyed during the decade before the Civil War. according to the Globe-Democrat.

The steamboats brought commerce and industry and wealth and population to St. Louis. From the crude structures built like a flatboat, nothing above deck but a pilot house and a smokestack, the steamboat evolved into fast and luxurious floating palaces.

In their heyday some reached a length of more than 300 feet, a width of 40 feet. They could carry as many as 400 passengers and 700 tons of freight. They were fast, had a record of huffing and puffing from New Orleans to St. Louis in as little as three and a half days." 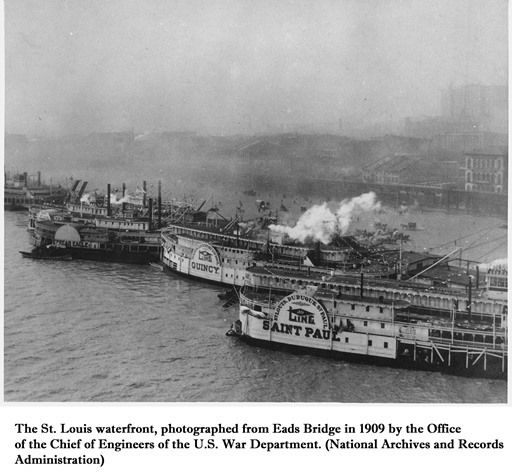 Back to top of page
The trip was hazardous -- the river was full of snags and the crude metals used to construct boilers were prone to spectacular and disastrous failures.

The magnificent steamboats "didn't live long with the hazards of explosion, fire, collision snags, sandbars and such. A veteran pilot who made a study of their longevity placed the average span of a steamboat back in those days at five years."
There were major tragedies on the rivers and one of greatest of marine disasters was the explosion of the steamboat Sultana in 1864 as it was coming up the Mississippi toward St. Louis, packed with Union soldiers. About 1,650 of the 2,200 aboard were killed.


On the river today
In the decades after the Civil War the railroads stretched across the continent and bumped river boats down a notch in stature. A visit to the Mississippi -- and the massive diesel-powered tows that chug past regularly -- makes it clear that the river continues to be an indispensible transportation resource.

With 70-miles of river, the Port of Metropolitan St. Louis continues to rank as the country's second-busiest inland port, boasts the St. Louis Regional Chamber. About 130 wharves, piers and docks serve the northern-most lock- and ice-free inland port.

According to U.S. Army Corps of Engineers Data, the port handled nearly 39 million tons of freight in 2014 and ranked 17th among all American ports. Surprisingly, St. Louis handled more tonnage than ocean-front ports such as Portland, Ore.; Tacoma and Seattle, Wash.; and Oakland, Calif.

Why we are here
“St. Louis owes its origins to two Frenchmen, Pierre Laclede and Auguste Chouteau, but it owes a much bigger debt to a river the Indians called ‘Missi Sipi’ – ‘great river,’” the St. Louis Globe-Democrat recounted in a 1964 celebration of the city’s bicentennial. “Without the river, the French fur traders would never have penetrated so far north from their New World base at New Orleans, making their way upstream in dugout canoes they called ‘pirogues.’”

The pirogues were paddled, poled and pulled 1,000 miles up river. An 1812 history, “Sketches of Louisiana,” explained, “Laclede conceived it a position where the trade of the Missouri, Mississippi and other rivers was most likely to center, and since that period St. Louis has been the emporium of trade in Upper Louisiana.”

The Mississippi often changed course during spring floods. In 1836 the U.S. Congress appropriated $15,000 to address silting above St. Louis that was turning the channel east. Young Army Lt. Robert E. Lee – later a Confederate Civil War general – designed a dam and dike that redirected water flow and kept the channel at the foot of St. Louis.

For more than a century the river was a bottleneck to land traffic crossing at St. Louis. A ferry service using canoes went into business in 1797. A few years later an operator invented barges powered by horses walking on treadmills. By 1832 a steam-powered ferry was crossing the river.

The Civil War, rife with attacks on river shipping, brought an end to the golden era of steamboating in St. Louis and possibly launched Chicago into supremacy.

“Chicago has been artful in drawing to itself a sturdy Northern immigration, and especially during the war was aided in this and every other way by the closing of the Mississippi to trade. This is in fact true,” wrote a reporter for Harper’s New Monthly Magazine in 1884.

“The blighting influence of the war on St. Louis, offset to some extent by its position as a centre of military supplies and troops, is so manifest in a study of the statistical tables that it almost seems that without it the inequality of the populations in the two places would not have existed.”

The Civil War forced hundreds of riverboat pilots into unemployment. One of them, St. Louis-based Samuel Clemens, traveled west. Failing to find fortune as a silver prospector in Nevada, he turned to newspaper writing and gave the world the literature of Mark Twain.

The first trip up the Mississippi River by Pierre Laclede and St. Louis' settlers unfolded even more slowly than the early crude steamboats. From the St. Louis Globe-Democrat in 1964:

It was not until Aug. 3, 1763, much later in the summer than he wished, that Laclede's flotilla pushed up the Mississippi and left New Orleans behind. The boats, which crudely resembled the barges of today, were pulled upstream by cordelles, or towropes. The cordellers walked along the banks and when the water was shallow men aboard poled the boats. At those infrequent times when the wind blew in the right direction a square sail was rigged on the stubby mast.
Through hot August, cool September and chilly October, the expedition, bearing a cargo of merchandise for fur trading, toiled up the current until in November it arrived at Ste. Genevieve which even then was an old settlement on the west bank of the river. Laclede, however, crossed to French Fort Chartres on the east side in response to a cordial invitation, stored his goods there and used it as a base of operations.

The expedition spent the winter at Fort Chartres before continuing north to bluff previously marked by Laclede.

When mild weather cleared the ice from the river early in February the cordellers slung a towrope over their shoulders and trudged up the west bank, pulling a boat laden with supplies and tools. Four days later, on the evening of Feb. 14, 1764, the 30 men and the boat reached the place of the marked trees.
###

Back to top of page 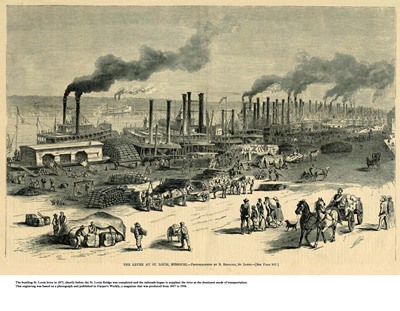 Subscribe to our Newsletter by clicking here.
Updated June 27, 2018