It's always time for a winery cruise

Continued from the Home Page... 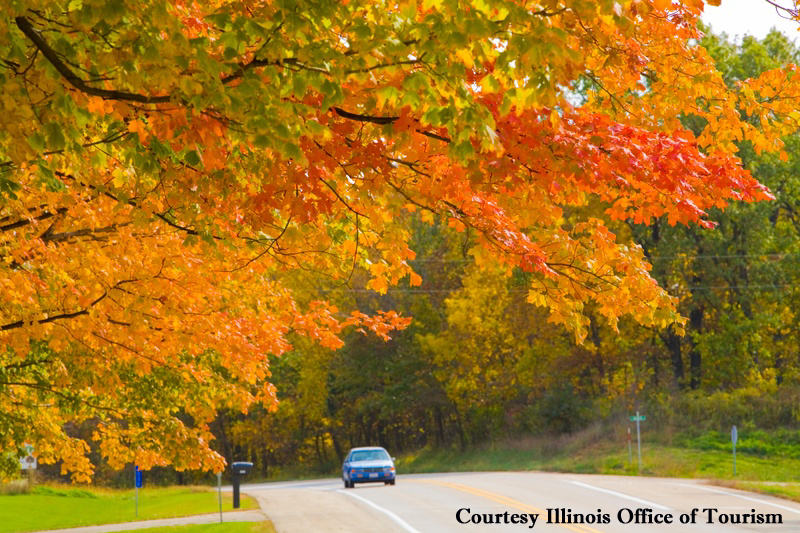 The return of cool fall weather releases the call of the open road. On the colder days of winter, too, a day of sunshine begs for a trip out of cabin fever. In this part of the country, wineries are popular destinations for days spent outside. 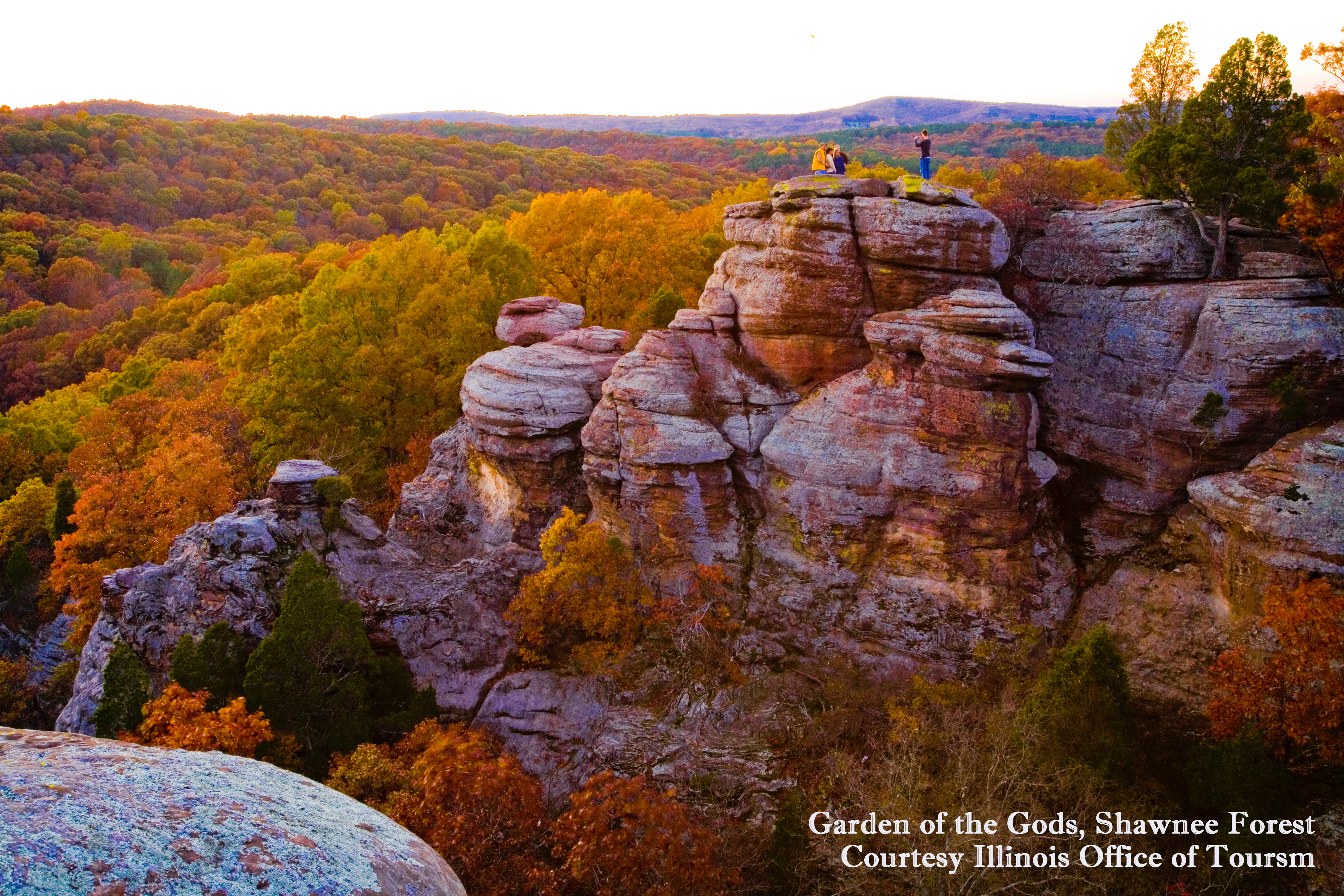 "We have very beautiful wine roads and a lot of opportunities to see scenic views," said Annette Alden, marketing director of the Missouri Wine and Grape Board in Jefferson City. "There are a lot of great wine festivals in the fall and there are other activities in the regions that support the wineries. There are interesting restaurants and shopping opportunities. You can make a whole weekend out of it."
Most of Missouri is dominated by rolling hills, forest, lakes, caves and the Ozark Mountains. Folks who know only of Illinois from the plains crossed by Interstate 70 might be surprised to learn that it holds plenty of scenic, hilly terrain suitable for wine-making, too.
Do many people outside of the Midwest know Illinois is home to 108 wineries? "No, I am not certain that they do," said Cindi Fleischli, executive director of the Illinois Grape Growers and Vintners Association (IGGVA) in Springfield. 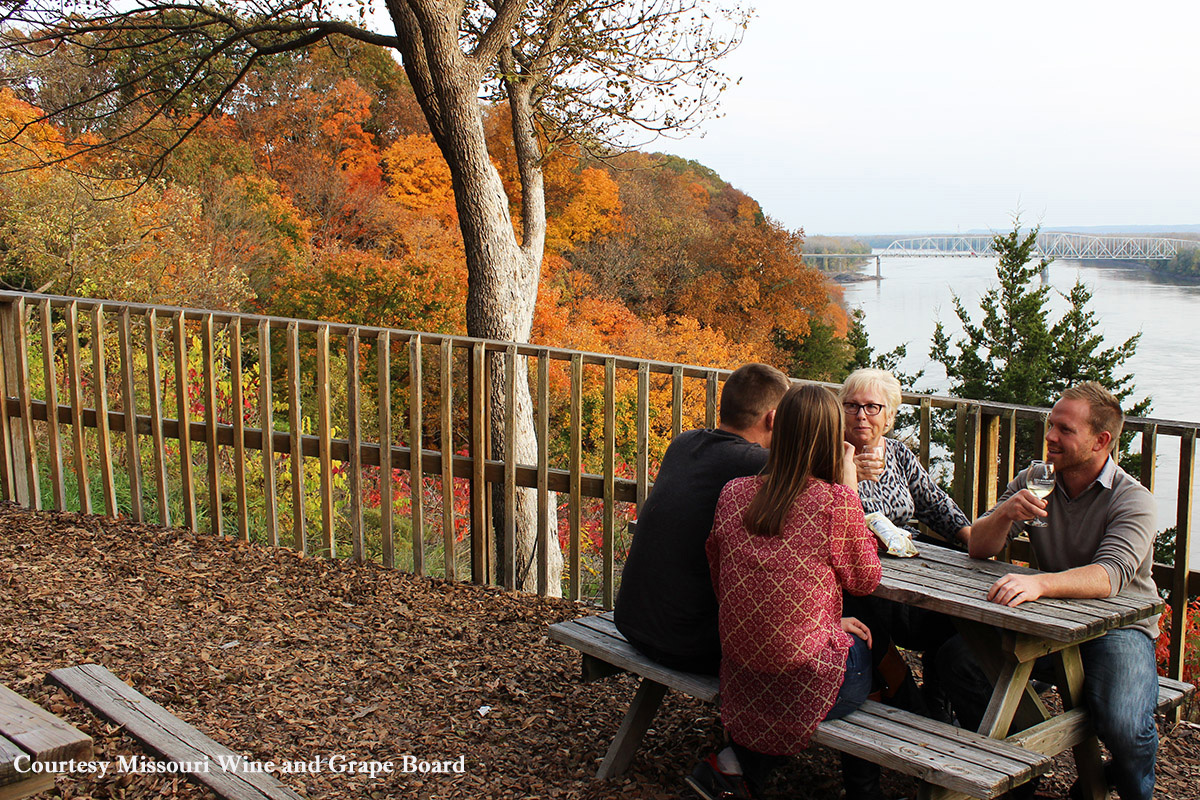 A scenic drive, fresh air and rural atmosphere make destination wine-tasting much more interesting than a trip to a neighborhood store, she added. "People are not just into shopping and buying, they're into experiential tourism. They like to have the relaxing environment and the mom-and-pop atmosphere of a winery."
As for scenery, she suggests the Shawnee Wine Trail in the Shawnee National Forest. Covering 280,000 acres in southern Illinois, it is one of the country's largest national forests and contains glades, prairies, caves, waterfalls and enormous rock formations. And its own viticultural area.

More than a hobby
Wine-making accounts for significant portions of the agricultural economies of Missouri and Illinois.
New wineries sprout, regionally and nationally, on seemingly a weekly basis, with wine production reported in all states except Hawaii. As of this reporting, there are 134 wineries in Missouri and 108 in Illinois. Combined they sold 1.38 billion gallons last year -- 993,831 in Missouri and 391,805 Illinois -- according to the U.S. Treasury Department. The U.S. industry is dominated by California, which was responsible for 84 percent of the national total -- 680.3 million gallons. Runner-up Washington state produced 40.7 million gallons, five percent of the national output. 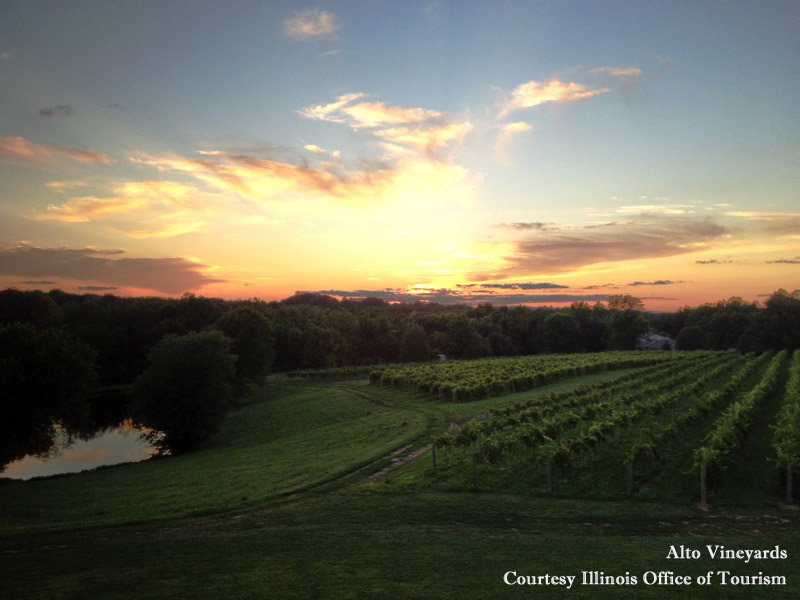 Midwestern winemaking nonetheless enhances rural economies. Studies have estimated the annual economic impact of the wine business at $3.25 billion in Missouri and $700 million in Illinois. About 950,000 tourists visit Missouri wineries annually -- the estimate for Illinois is 500,000. That supports 14,959 jobs in Missouri and 3,887 in Illinois.
"Our wineries supply jobs in areas that don't have many jobs." said Fleischli.
Wineries are distributed across most areas of both states -- there should be a winery, if not a complete wine trail, within one or two hours of driving time for most residents.
The Missouri Wine and Grape Board displays 11 regional wine trails of clustered vintners on its maps (https://missouriwine.org/). The Illinois Grape Growers and Vintners Association web site (https://illinoiswine.com/) plots wineries in four regions, ranging from north to south, and eight wine trails.
Missouri holds five American Viticultural Areas (AVA), which are designated by the federal Alcohol and Tobacco Tax and Trade Bureau to "allow vintners and consumers to attribute a given quality, reputation, or other characteristic of a wine made from grapes grown in an area to its geographic origin." 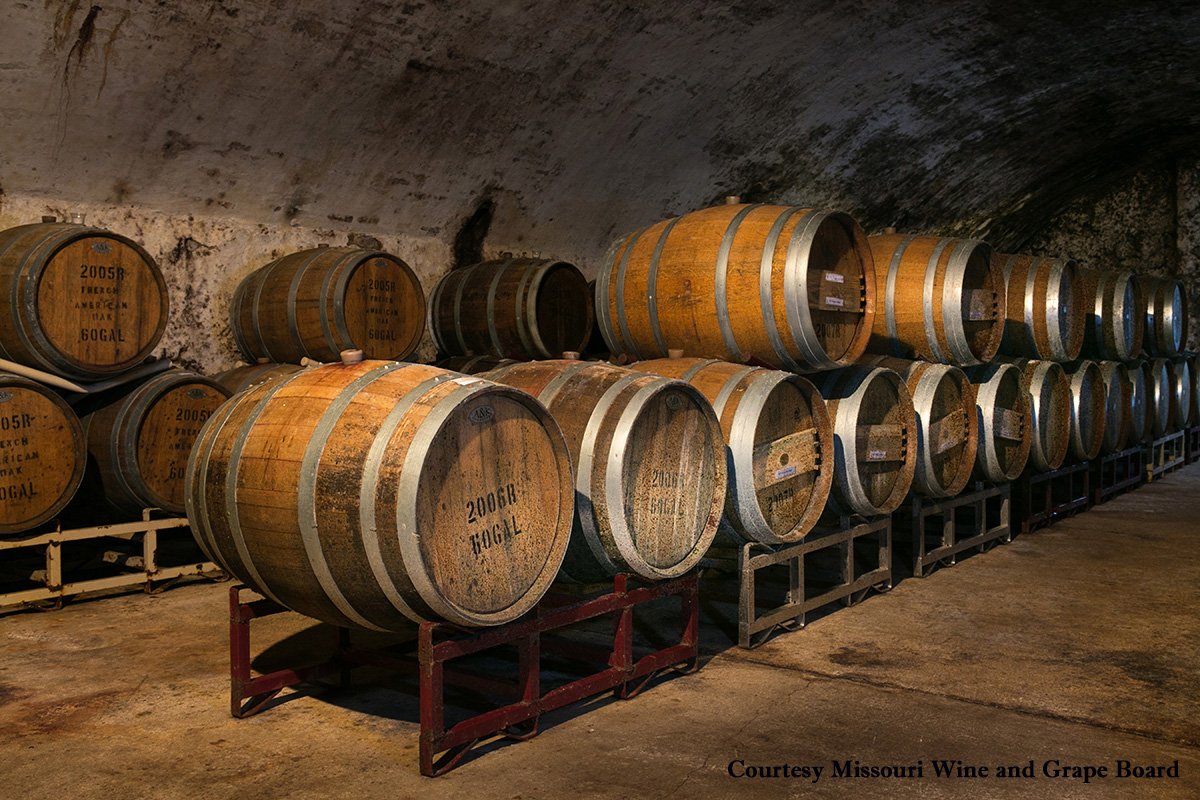 The Missouri AVA's are Augusta, Ozark Mountain, Hermann, Loess Hills and Ozark Highlands.
Illinois is home to the Shawnee Hills AVA and is part of the Upper Mississippi River Valley AVA, which includes parts of Minnesota, Wisconsin and Iowa.
AVA designations are based on a region's "common or similar features" including climate, soils, geology and physical features such as topography and geography.
The state web sites also list festivals and other special events scheduled at the wineries.
Wine class
Aficionados or casual sippers who are mostly familiar with popular California wines will find new varietals on Midwestern tastings. The best-known grapes grown in the ideal conditions of California would not survive the shorter growing season here, so there are new names to learn.
"We have areas that are ideal for growing grapes," said Alden of the Missouri Wine Board. "There are varietals that do very well here. We have white, red, sweet and rose. Our winemakers are expanding their wine styles."
"Vignoles is the most widely grown white wine across the state. Chardonel is a French-American hybrid. We also have Seyval Blanc," Alden says. The Norton/Cynthiana grape, identified by both names, is native to America and is the region's premium red wine grape. "Also we have Chambourcin, more of a medium-bodied red."
"The Chardonel grape is much like a Chardonnay," Fleischli said. "The bulk of our wineries are growing Norton, which is like a merlot." 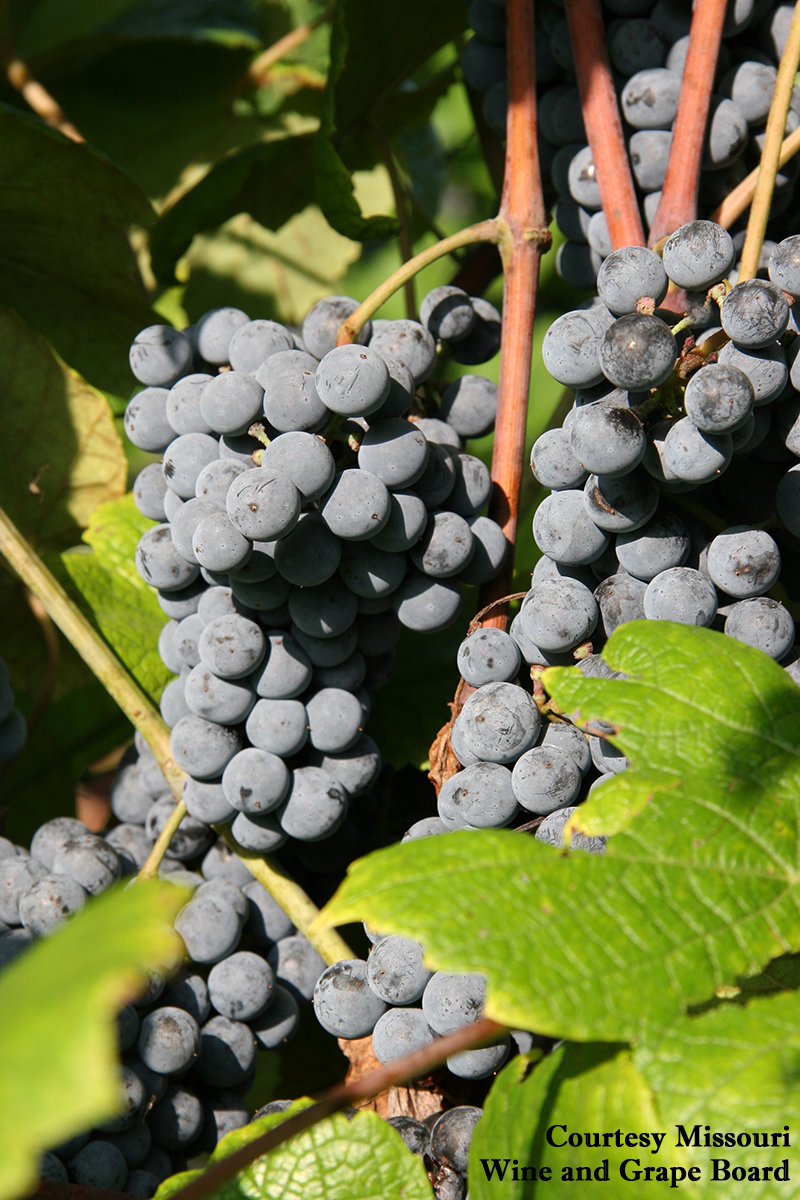 Another popular regional grape is catawba, a North American native with a long winemaking history. The Missouri Wine Board says it "makes a medium-bodied, fruity labrusca wine that is best made in a sweeter style."

Tradition
Catawba was the wine of choice for the epic 1859 flight of the gas balloon Atlantic, which launched from downtown St. Louis on July 1 and crash-landed the next day at Adams, N.Y. The balloon covered an estimated 1,180 miles in 19 hours; for decades the trip was revered as "The Greatest American Balloon Voyage."
William Hyde, editor of the St. Louis Republic newspaper, accompanied the balloon's three-man crew. He wrote that the airship's cargo included "a large quantity of cold chickens, tongues, potted meats, sandwiches, etc." and "numerous dark-colored, long-necked vessels" containing, among other refreshments, "sparkling catawba."
###

Subscribe to our Newsletter by clicking here.
Updated June 27, 2018